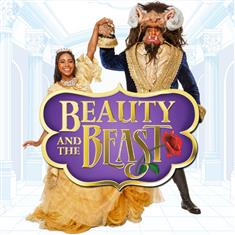 Millfield Theatre is proud to continually receive amazing feedback from their Christmas Pantomimes year after year.  Alongside the backstage work, the talented cast is astonishing; powerful and very entertaining. This has not happened over night, in order to create a pantomime that is high end and of an amazing quality, the cast have to be talented.

This year Millfield Theatre is proud to announce their cast for this year’s Christmas. Find out about the cast here.

Lottie-Daisy Francis as Beauty
Lottie-Daisy Francis began her career training at LAMDA and the Urdang Academy, studying musical theatre. Some of her theatre credits include: Princess Alice in Puss In Boots (Hoxton Hall & Dugdale Centre); Friend 2 in The Quentin Dentin Show (Tristan Bates Theatre) and Cast Album; Camilla Morgan in It Tastes Like Home (Tristan Bates Theatre) and many more.
Recently, Lottie-Daisy has moved into television and film, working on ‘Alan Carr’s New Years Eve Spectacular’ in 2017, and the new British movie ‘The Bromley Boys’ in 2018.

James Edge as The Best/ Prince Phillipe
James trained at the Royal Birmingham Conservatoire and graduated in 2015.
Since graduating, James has been busy working with the Birmingham Rep in Multiple ‘Foundry Nights’, a Workshop of ‘Vilehalla’ and performed as Phillip in ‘The Cage’ which won “Best Piece of the Night” by a guest panel of judges.
James has performed multiple shows at The Old Joint Stock. These include Macduff in ‘Macbeth’, Jacob Wiley in ‘Billy Young – A Life On Death Row’, Jason in ‘Ordinary Days’ and most recently Richard in ‘Thrill Me’
national tour of ‘The Marriage of Kim K’. The production was nominated for a Manchester Theatre Award and completed its run at the Arcola Theatre. London.

Alex Scott Fairley as Witch Heather
Alex is delighted to be appearing in pantomime at Millfield again! He has previously appeared here as (deep breath) Fleshcreep in Jack and the Beanstalk, Abanazar in Aladdin, Ronnie Hardup in Cinderella, Carabosse in Sleeping Beauty, King Rat in Dick Whittington, The Demon King in Mother Goose and Madame Fifi in (a different) Beauty and the Beast.
Alex has just finished appearing at Pitlochry Festival Theatre as Mary Sunshine in Chicago, James Joyce in Travesties, and Lieutenant Spicer in Quality Street. His other credits include Round The Horne (Apollo Theatre); The Shakespeare Revue, (UK Tour); Stiles and Drewe’s The Three Little Pigs (UK Tour); Blood Brothers (Phoenix) and an extortionate list of fantastic, international performances.
Quite a long time ago, Alex studied English at Jesus College, Oxford, and he still works as a proof-reader and translator, for everyone from Volkswagen to the University of Bern. His translation work for the stage includes Der Grüffelo for Junges Theater, Bonn.

Philip trained at the Royal Central School of Speech and Drama in London
Previously in pantomime Philip has played: Will Scarlet in Robin Hood, Clive the Camel in King Tut – A Pyramid Panto and Grendal in Beowulf.
Theatre credits include: Ralph Rackstraw in H.M.S Pinafore UK tour, KoKo in The Mikado at King’s Head Theatre, Alfredo in La Traviata at the Soho Theatre and on tour, Dick Dauntless in Ruddigore for Charles Court Opera, Mr Snow in Carousel for Opera North at the Barbican and many many more.