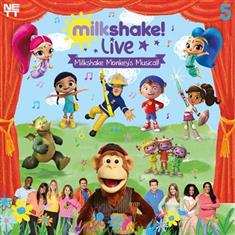 Milkshake! Monkey can’t wait to put on a spectacular new musical for you all! But when stage fright hits, his favourite Milkshake! friends come to help, creating the most dazzling Milkshake! show families will ever see!

Starring alongside the much loved Milkshake! Monkey will be 2 channel presenters as well as Fireman Sam, Noddy, Shimmer & Shine, Digby Dragon, Wissper, Nella the Princess Knight and Floogals.

Show director and Milkshake! presenter Derek Moran said, “Milkshake! Monkey’s Musical is bursting with fun, taking our young audience on a journey which champions friendship and positivity. The show is jam packed with audience participation, encouraging kids to get up, join in and hopefully put on their own shows at home”.

Kids will learn amazing songs and bops with their favourite Milkshake! friends, and watch as the music, the lights, the costumes and show come together!

“Following the success of the last Milkshake! Live tour, we are delighted to take this new Milkshake! musical to our fans all around the UK so that everyone can have the opportunity to see their favourite characters and presenters and take part in a really fun show” said Louise

UK families can find out more about Milkshake! Live ‘Milkshake Monkey’s Musical’ by visiting facebook.com/milkshakelive/ or by following the tour on twitter @milkshaketour or Instagram @milkshakelive.

Channel 5’s Milkshake! is home to some of the world’s favourite pre-school characters. Channel 5

broadcasts 24 hours of children’s programmes every week.  2018 has been best year ever for share amongst Kids 4-15 for Milkshake! There is a range of stimulating and engaging