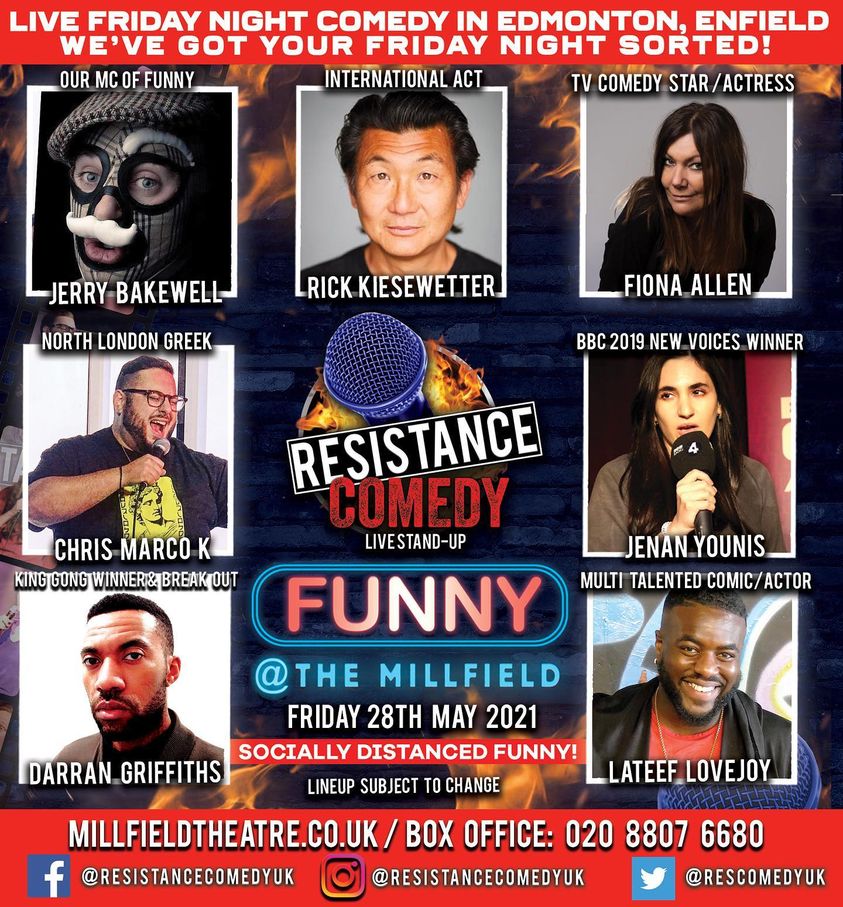 Dugdale’s Regular Comedy Club is at Millfield Theatre. “Join The Resistance that EVERYONE is talking about!”


Expect some of the best UK and International Acts to make you laugh your socks off at Millfield Theatre.
Tickets are sure to fly so reserve your seats now and avoid disappointment!The line up so far is:JERRY BAKEWELL MC (Resistance Comedy Regular): HOW DO!!!Weighing in at 17-and-a-half stone, Jerry Bakewell is Britain’s most unsuccessful Mexican wrestler and Europe’s heaviest light entertainer.FIONA ALLENFiona has appeared in many sketch shows, including We Know Where You Live (Channel 5), Smack the Pony (Channel 4), Goodness Gracious Me (BBC) and The All Star Comedy Show.RICK KIESEWETTER
Rick Kiesewetter is an Asian American now a British citizen, this gives him his take on the world. His comedy is based on everything from relationships, to being a contender on the cult UK ITV show Gladiators.JENAN YOUNISJenan is a British Ethnic ‘Brethnic’ comedian of Middle Eastern heritage. Her comedy on stage has been described as a ‘slap in the face’ in the most pacifist sense possible. Jenan Younis shows what it means to be “ethnic” in woke-ish modern Britain.LATEEF LOVEJOYMulti Talented Actor, Stand Up Comedian and one of the most distinctive acts on the mainstream and international comedy circuits. He is the face of ITV hub and was head hunted to be the official mascot of U SWITCH, Playing the role of ‘Coach’ seen across TV and Major digital platforms.DARRAN GRIFFITHSA comedian, host and podcaster born and raised in Harlow, to Jamaican parents, he has a blend of Caribbean confidence and Essex irreverence.CHRIS MARCO KNorth London Greek and YouTube|Radio Personality and Personality. in 2019 he completed his 2nd successful solo sellout show Being Greek at the Dugdale Theatre.Lineup Subject to changeResistance Comedy Have Your Friday Night Sorted!Tickets: £14 | £12 | £10

Yes that’s right – after 15 months of our amazing school holidays camps being on hold – (we held back for Summer, October and Easter with the COVID-19 restrictions) – we are absolutely delighted to confirm that our holiday half term camps will be BACK for the May Half term – which actually falls in June – while we have teamed up with @nbsocceracademy to offer the best football activities and fun for the full 4 days of 1st to 4th June and expect to be sold out quickly – so book now and enjoy the spring half term with us at Trent Park

Karen is so excited to finally see you all face to face. Our Circuit class starts again next Monday 17th May at 7.15pmDue to restrictions there will be limited numbers but bookings are now open. TO BOOK go to our calendar on www.bodyfaze.comIf you’re not on our mailing list sign up here https://linktr.ee/Bodyfaze

Sibling discount availableEnjoy a fabulous time with Little Voices while your child has lots of **FUN** and **LEARN LIFE SKILLS **at the same time!Live performance at the end of the week to parents & friends. Government guidelines permitted.**Little Voices | Drama & Singing Lessons of Distinction**https://www.littlevoices.org.uk/